The image of God in us

We are all created in the image of God. Inside of every single one of us, there’s a better human struggling to get out. If that’s focused upon, recognized, and encouraged, that will happen.

From a social standpoint, I really don’t so much care what religion people formally confess as I care that by their actions and attitudes they see the other human being as being infinitely worthy of love and care. In daily life, it’s more productive to deal with good Samaritans (atheists / Muslims / Buddhists / whoever else) that care for the person on the side of the road, rather than be in the company of those who use the name of God as an excuse to ignore or even provoke needless sufferings of a fellow human being. For the latter group, it’s immaterial whether they refer to themselves as Christian or Muslim or Nazi or Communist. Those designations are a mere veneer over the real mechanism of destroying the image of God in a fellow human being.

The problem that happened as the result of the Fall was not that humans became wretches / irreparably depraved / etc. The problem was that death entered the world, and corrupted the image of God in people and in the world. What was needed was an infusion of life, of divine nature, and the presence of Someone who would believe in people’s infinite worth. That was the mission and the role of Jesus. He didn’t die for us because we were wretches. He died for us because we were mortal and frail, and also because we believed in the lies that told us that we were not worthy of God. We believed the voices of others, and had lost our way. He showed us exactly what we were worth, and he showed us that the way to God is simply by allowing our human nature to be infused with the nature divine (theosis), and letting that combination take over our lives.

END_OF_DOCUMENT_TOKEN_TO_BE_REPLACED

According to Maslow’s theory, this hierarchy reflects our needs and longings as humans. You might ask: where is God in here? The answer is that he’s all throughout all of this. This is who we are as humans. This is a reflected image of God: 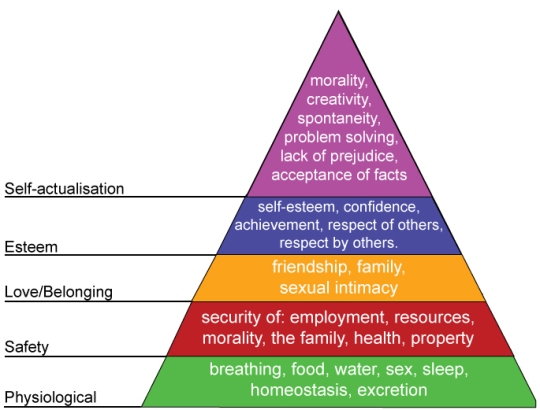 God created us in his image. Then we decided to return the favor. What is your image of God?
END_OF_DOCUMENT_TOKEN_TO_BE_REPLACED