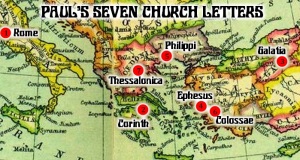 The beginning chapters of the book of Revelation contain 7 letters to the 7 churches. The churches are represented by seven golden lampstands. More specifically, the letters are addressed to the “7 stars”, representing the “7 angels of the churches”. What do all those expressions mean?

First of all, the word “church” (Greek “ekklesia”) simply means “called out / convoked gathering or assembly”. As a matter of fact, this exact same word “ekklesia” is used several dozen times in the Greek translation of the Old Testament (the Septuagint, or LXX) to translate the Hebrew words denoting “convoked assembly”. All of these words simply referred to the people of Israel. In the New Covenant, this same word is used to refer to the body of Christ. So we have one word, and two different meanings which depend on the context.

Another interesting word is “synagogue”. In Greek literally means “to lead / bring together” and has a very similar meaning to the word “ekklesia”. In LXX, sometimes the cognates of these two words are used nearly interchangeably. For instance:

Leviticus 8:1,3
The Lord said to Moses … gather (ekklesiazo) the entire assembly (synagoge) at the entrance to the tent of meeting.

Therefore, I will use the word “assembly” instead of “church” in this write-up from hereon out, as that would avoid anachronistically reading our modern meanings into the text that doesn’t necessarily support it.
END_OF_DOCUMENT_TOKEN_TO_BE_REPLACED