Shadrach, Meshach, Abednego saved from the blazing furnace: an example of unwavering faith, or a “sovereign” act of God? 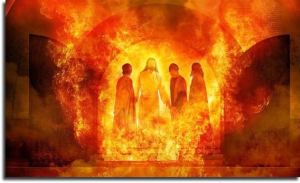 Let’s consider the story of Shadrach, Meshach and Abednego (the pagan names by which Hananiah, Mishael and Azariah became known). You might want to re-read Daniel chapters 1-3 for this.

I will examine the test in a translation that’s literal and fairly faithful to the original. NKJV suffices in this instance. Please feel free to consult an interlinear for this, to verify with the original text (I have). We will be relying on the inspired original text for the correct understanding. I could have translated this hyper-literally from the original, but I want to make a point that what I am about to say can easily be established based on a literal English translation that’s true to the original like NKJV or YLT, using simple logic.

Daniel 3:1, 4-6 sets up the scene:
1 Nebuchadnezzar the king made an image of gold, whose height was sixty cubits and its width six cubits. He set it up in the plain of Dura, in the province of Babylon.
4 Then a herald cried aloud: “To you it is commanded, O peoples, nations, and languages, 5 that at the time you hear the sound of the horn, flute, harp, lyre, and psaltery, in symphony with all kinds of music, you shall fall down and worship the gold image that King Nebuchadnezzar has set up; 6 and whoever does not fall down and worship shall be cast immediately into the midst of a burning fiery furnace.”

Daniel’s 3 friends, being true to their Jewish faith that forbade idol worship, didn’t comply. They immediately got reported to the king. Here’s king Nebuchadnezzar’s response:

Daniel 3:14-15
14 Nebuchadnezzar spoke, saying to them, “Is it true, Shadrach, Meshach, and Abed-Nego, that you do not serve my gods or worship the gold image which I have set up? 15 Now if you are ready at the time you hear the sound of the horn, flute, harp, lyre, and psaltery, in symphony with all kinds of music, and you fall down and worship the image which I have made, good! But if you do not worship, you shall be cast immediately into the midst of a burning fiery furnace. And who is the god who will deliver you from my hands?”

Translator’s additions are in italics, and are not part of the original text.

King’s two “ifs”
1) If you worship – then nothing (literally, the text says nothing – meaning no consequences to the three youths)
2) If you do not worship – then you shall be cast immediately into the burning fiery furnace.

The king concludes his ultimatum with asking this sarcastic question: “And who is the god who will deliver you from my hands?” The ball is now in the hands of the 3 faithful Hebrew young men.

Now, let’s look at their response to the king.

Daniel 3:16
16 Shadrach, Meshach, and Abed-Nego answered and said to the king, “O Nebuchadnezzar, we have no need to answer you in this matter. 17 If that is the case, our God whom we serve is able to deliver us from the burning fiery furnace, and He will deliver us from your hand, O king. 18 But if not, let it be known to you, O king, that we do not serve your gods, nor will we worship the gold image which you have set up.”

First off, please not that the phrase “is the case” is not part of the original text, and was translator-added. This is evidenced by italics used in NKJV. So let’s leave that off.

Their answer is also structured as two sets of “ifs”, stating the two cause-end-effect scenarios, from their perspective:

Youths’ two “ifs”
1) if that – then God is able to and will deliver us from the furnace
2) if not – then we won’t worship your image.

Point 1 is a textbook-perfect statement of faith. God not only can, but he is going to. That’s the confident expectation of things hoped for, the assurance of things not seen. If you read on to the end of chapter 3, you will see that their faith supplied the basis for their confident expectation, and produced a tangible proof of it. They didn’t even have the smell of smoke on their clothes. And Jehovah himself showed up on the scene. Clearly, he was pleased with their faith (Hebrews 11:6).

Point 2 states that even if you spare our lives, and expect us to worship the golden image in return – we are declaring a priori that our conscious decision is still to not worship it.

It’s all very clear. Logically, the two statements are a one-to-one match to king’s two statements, presented in reverse order. This is clear from the context – the 3 youths’ first response pre-supposes that they are in the oven, which matches the king’s threat in his 2nd “if” statement.

Stylistically, such reverse order (inverted parallelism, to be more precise) that you observe in the youth’s two “ifs” inversely matching the king’s two “thens” is a very common stylistic device in ancient Mediterranean literature, and is called “ring composition”, or “chiasmus”. It’s occurs frequently in the Scriptures both on a macro level (spanning entire chapters) and on a micro level (as it does here). Here’s another good example:

You really didn’t need to know that stylistic device to get the meaning in either example, in both cases it’s readily obvious from the context. I am just giving you this information to eliminate any last of the stumbling blocks to help you be 100% clear on this.

Now, due to heavy religious traditions surrounding the issue of Scriptural faith, most translations don’t follow this simple logic that’s clearly present in the original Hebrew. They read into the text what’s not there. Consider the usually trusty NASB:

Daniel 3:17-18 New American Standard Bible (NASB)
17 If it be so, our God whom we serve is able to deliver us from the furnace of blazing fire; and He will deliver us out of your hand, O king. 18 But even if He does not, let it be known to you, O king, that we are not going to serve your gods or worship the golden image that you have set up.”

Notice how the words “even” and “He does” are in italics (or with the underline, in my rendition), and are again thus acknowledged to not be part of the original text. The extra text has been added by translators to make the passages easier to read. Well, the text is not easier to read; it’s now completely opposite to what it’s supposed to be! If you leave the additions in italics out, you can maybe make your own conclusions. But the translator puts the bug in your ear, and it’s too late for you to exercise your independent thinking by then. Most other translations just follow the same suit, and you won’t even get the courtesy or marginal renderings, or italics.

As I’ve shown above, the “if not” of v. 18 (youth’s second statement) logically relates to the first of king’s “if-then” statements. Which most translations miss, due to common erroneous religious traditions.

But for argument’s sake, let’s imagine that they are right, after all, and that “if not” in v. 18 pertains to God not saving the youths from the oven. Then their statement becomes “But even if [He does] not [save us], let it be known to you, O king, that we are not going to serve your gods or worship the golden image that you have set up.”

First, notice how now I am forced to read into the text what’s not there at all (additions in square brackets). So, it’s no longer exegesis, it’s eisegesis.

Second, if it were the case, then the “if he does not” completely negates the confident “and he will” that immediately precedes it. So, which one is it – “he will” or “maybe he will, maybe he won’t”. The “maybe he will, maybe he won’t” would be a total cop-out, since the statement “A or non-A” always logically evaluates to true, without any faith required on your part. That’s not Scriptural faith. If at least the three young men didn’t say “and he will”, and just left it at “he is able to”, it would have made more sense, logically (and would have made them extra crispy too).

Third , if that were the meaning, the statement is nonsensical. If you follow the logic of the statement, them not bowing down to the idol would occur after the part following “if” (them being thrown into the oven and burned). In that phrase, we view them not bowing down as a pre-determined, then-future-tense conscious, courageous choice on their part. Well, in this scenario the text can’t be understood that way at all.

You see in the passage how even those standing next to the mouth of the oven got burned to death. Of course the three men wouldn’t serve or worship either the golden image, or Jehovah, or any other god due to the simple fact that they would be reduced to ashes! You have to be alive to worship or bow down. Dead people do neither.

If the punishment were non-lethal, then they could say “but even if you cut off my arm / poke out my eyes / kill my family, I will not bow down to the golden image”, that would have made sense. You would still be alive, and not bowing down would still be a matter of choice on your part, which you declared beforehand. But the scenario in the passage doesn’t lend itself to this interpretation.

If the part following “if” were “God won’t save us”, then the second part “we will still not serve your gods or worship the golden image” couldn’t possibly be describing the a priori decision about a conscious choice in a future situation. The specifics of the scenario itself renders that possibility completely null. If that were the statement, it would be completely nonsensical. And again, that would not even be biblical faith.

The Scriptures set a lofty example for us to follow, to be sure. But let’s not lower the bar to match our experience, hoping for a “sovereign intervention”. It might never happen. But real faith always gets what it stands on. And those 3 young men weren’t even under the new covenant. And that makes this story even more amazing.

The state of the evangelical marketplace of theological inquiry

Comments on: "Shadrach, Meshach, Abednego saved from the blazing furnace: an example of unwavering faith, or a “sovereign” act of God?" (1)