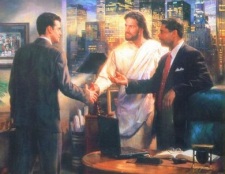 In modern Western Christianity Jesus is thought to be confined to the church’s very limited sphere of influence. That typically includes issues of afterlife, personal morality, interpersonal relationships, and an assortment of marital and sexual issues.

As far as leadership, governance, and financial issues are concerned, those are typically confined to running a registered non-profit, which serves as an organizational shell for a given religious fellowship. Things like national governance, corporate governance, banking system, debt issues, welfare, immigration policies, healthcare, and many others are considered to be the prerogatives of a secular state. And since we accept the idea of separation of “church” and state, many honest-to-God Christians are quite content with such distribution of responsibilities.

So naturally, our Christian worldview is largely circumscribed by this bias, and typically doesn’t go outside of these unquestioned, culturally imposed boundaries.

However, this limited understanding is not supported by the Scriptures.

Here’s one litmus test for your theological prism. When you think about Sodom and Gomorrah and the reason for God’s displeasure with those cities, what’s the first thing that comes to mind? More likely than not, your answer is focused on issues of sexual nature. Now that you’ve answered this first question, then my next question is – are there any other reasons for God’s displeasure with those two cities that come to mind? Anything at all?

Let me turn your attention to Isaiah’s prophecy regarding Judah. In it, he likens the southern kingdom to Sodom and Gomorrah, and here are the specific reasons for his displeasure that he highlights:

Isaiah 1
15 When you spread out your hands in prayer,
I hide my eyes from you;
even when you offer many prayers,
I am not listening.
Your hands are full of blood!
16 Wash and make yourselves clean.
Take your evil deeds out of my sight;
stop doing wrong.
17 Learn to do right; seek justice.
Defend the oppressed.
Take up the cause of the fatherless;
plead the case of the widow.

Read the entire 1st chapter of Isaiah. You won’t find any rebukes for sexual misconduct. Not that it’s not important, but apparently God had thought the issues of right labor relations and of social justice to be much more important for Judah’s continued corporate prosperity, so he focused on them exclusively in this discourse.

As shown in the entire Hebrew / Old Testament corpus of writings, and specifically in the history of Israel, God is just as concerned with governance, economics, politics, financial systems and welfare as he is with one’s morality and character. Jesus was prophesied to have the government of the world of his shoulders, and the increase of the peace and prosperity of that government was to be without end (Isaiah 9:6-7).

As far as the Gospel texts are concerned, Jesus Christ taught more about subjects such as money, greed, financial management, and debt servicing than he did about prayer, fasting, and gehenna, combined! The stated goal of Jesus Christ is not to govern religious non-profit organizations. His stated goal is to govern the world through his people, referred to collectively as his called-out gathering. In Greek, that word is “ekklesia” (ἐκκλησία), usually translated as the “church” in the invisible, universal sense.

I should note here that Chirist’s modus operandi for governance is not a dictatorial one, but is rather based on principles of servant-leadership, self-sacrifice, truth, transparency, dignity, respect, and trust.

The history of Christendom doesn’t favor relegating the big issues of life to a secular government, either. The fact of the matter is that Christ followers founded or had a significant impact on founding many modern institutions that are indispensable to our Western civilization.

For instance, modern systems of schooling, university education, science, and healthcare are deeply and firmly rooted in the practice of Christ followers of the day. Obviously, the early Christians’ understanding was that those spheres of life and endeavor firmly lay within their purview.

If you read the mottoes of some of the older universities , you will see where they took their inspiration for their reason to exist: “Under God’s Power She Flourishes” (Princeton University, USA), “Urim and Thummim” – ancient Israel’s divine guidance artifacts, as recorded in the Bible (Yale University, USA), “In God we Hope” (Brown University, USA), “The Lord Is My Light” (Oxford University, Great Britain), “Truth Through the Grace of God and Through Nature” (Uppsala University, Sweden), etc.

If you scan the names of many older and more established hospital systems in the USA, you won’t miss the fact that a lot of their names originate from the Bible: “Christ”, “Mercy”, “Good Samaritan”, “Trinity”, “Providence”, “Bethesda”, etc. Those names quite clearly point to of their founders’ worldview.

If you survey the religious beliefs of many founding fathers of modern science, you will find that the overwhelming majority of them were Christ followers. Nicholas Copernicus, Francis Bacon, Johannes Kepler, Galileo Galilei, Rene Descartes, Blaise Pascal, Isaac Newton, Robert Boyle, Michael Faraday, Gregor Mendel, and William Thomson Kelvin are some of the most illustrious examples of them. Admittedly, some of them had issues with organized religion. However, nearly all of them credit their belief in a creator God, the God of order, to be among their chief inspirations for doing science, and even for believing in the very possibility of doing science.

If you have U.S. currency in your wallet, take out a paper bill and look at its reverse, and you will the wording “In God We Trust”. This is the official motto of the entire country of the United States. And even though this motto is of a relatively recent vintage, it comes as no surprise. After all, nearly all of the U.S. founding fathers were God-honoring followers of Jesus Christ.

So, the God of the Bible is concerned with all aspects and facets of human life and endeavor, be it individual, or corporate. He is the God of families and Sunday morning gatherings all right. But he is also the God of politics, government, economics, business, academia, education, science, culture, and mass media.

Will the real Gospel please stand up?

7 ways in which the church is different from Israel